I know I said I wasn’t going to throw any sickies with the final curtain call looming, but it has been the coldest July on record. In subtropical Queensland we don’t own heaters, nor do many of us have carpeted floors. And sometimes it is simply appropriate to spend a mental health day at home. With lots of coffee.

On the invitation of a good friend who shares a common interest in military history – her Dad was a Prisoner of War in Changi during WW2 – I was fortunate to attend the official book launch of The Missing Man by Peter Rees.

I was quite familiar with Peter Rees, the author of Lancaster Men: The Aussie Heroes Of Bomber Command – my own personal area of interest – as well as Anzac Girls, the story of Australian WW1 nurses. 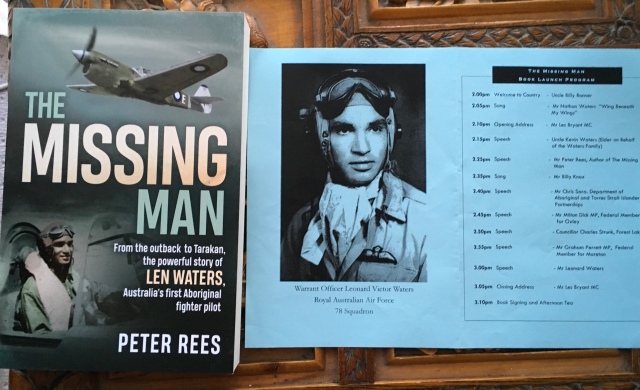 I was not familiar with Len Waters, nor the parkland in Inala named in his honour, in which this function was held.

Who was Len Waters? Essentially Len Waters was Australia’s first Aboriginal fighter pilot. He was born on an Aboriginal reserve, left school at 13, and was flying Kittyhawks over the Pacific during WW2 less than ten years later as part of 78 Fighter Squadron.

You know what was really amazing about this? Australia’s indigenous people were only formally recognised as Australian citizens in 1967. In that year 90.77 per cent of Australians voted ‘yes’ in a constitutional referendum to improve indigenous rights and award citizenship to Aborigines and Torres Strait Islanders.

After the war, Len settled in Inala and raised his family. He had plans to become part of Australia’s emerging commercial airline industry, after having broken through race barriers during the war with such a distinguished flying career. These plans were thwarted on five separate occasions, and his application to join the Occupational Force during the Korean Conflict was also declined. Instead of flying, Warrant Officer Leonard Waters became the Missing Man in our wartime flying history.

This function included representation by several generations of the Waters Family, some travelling from interstate, as well as representatives from the Royal Australian Airforce. It was particularly pleasing to see uniformed Airforce Cadets listening and learning from various speeches, as well as the Aboriginal Police Liaison Officers mingling amongst the crowds.

Several Government officials of different levels spoke at the event sharing information about Len Waters and how the parkland, including aeroplane propellor, evolved. The applause when Milton Dick, MP, Federal Member For Oxley, announced that there was an agreement to purchase copies of books for inclusion into all local school libraries as a teaching resource was heartfelt, and I must admit to shedding a tear.

Well done to the organisers of this function, to the Government officials for a total lack of bickering and point scoring, as well as to Peter Rees for telling a story that needed to be shared. Yes, of course I bought several copies. That’s my Christmas shopping done and dusted.