The Australian War Memorial is Australia’s national memorial to the members of its armed forces and supporting organisations who have died or participated in wars involving the Commonwealth of Australia, and some conflicts involving personnel from the Australian colonies prior to Federation. The memorial includes an extensive national military museum. The Australian War Memorial was opened in 1941, and is widely regarded as one of the most significant memorials of its type in the world.
-From Wikipedia.

Situated in Canberra, our Capital, the AWM draws thousands of international and domestic tourists each year. Aussie’s have an uneasy relationship with Canberra, being the location of Parliament and with a very high percentage of Public Servants. Personally I love Canberra. Our bush Capital is a Foodies Delight, with an abundance of wineries, magnificent gardens and reserves, and there are so many interesting places to visit. With Remembrance Day only days away here are a few of my favourite photos from my last visit to the AWM.

From the AWM looking towards Parliament House. The avenue is full of touching memorials and makes for an interesting walk. 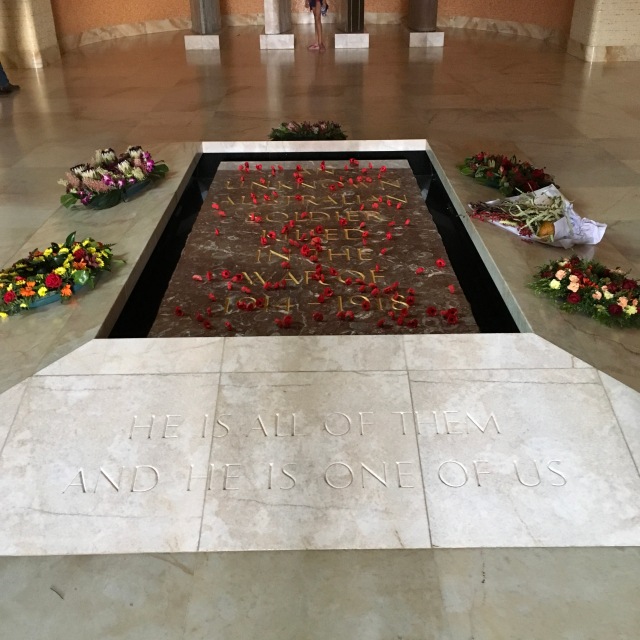 The Tomb of the Unknown Soldier. 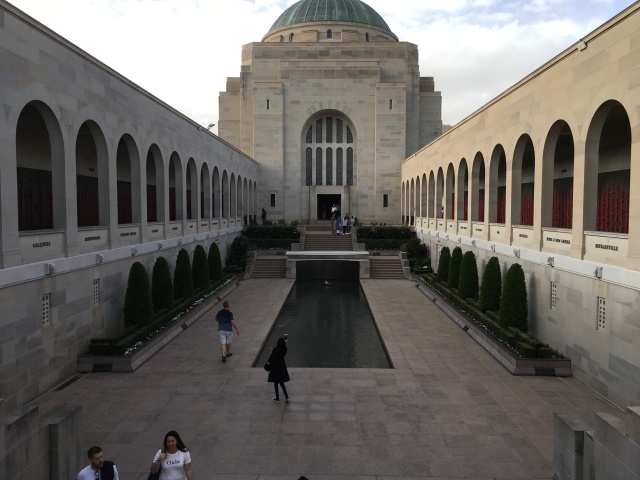 The Pool of Remembrance. Every evening at 5 pm there is a Closing Ceremony on these steps, including bagpipes, which includes a memorial to a nominated exservice person. 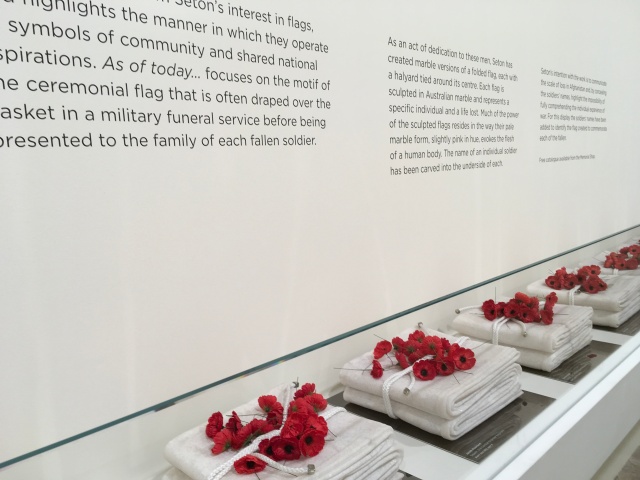 Afghanistan Memorial. Each of these marble sculptures represents a young life lost. You have to walk past them to exit the building.Talk about emotional!

Time for a coffee at Poppy’s Cafe.

There is also a well stocked military bookshop which gleans money from me each and every visit.

The grounds are full of bronze sculptures and the odd tank, as well as local wildlife. It is suggested that a minimum of two days is required to see it all. Exhibits change on a regular basis. I’ve never had time to work my way through the naval displays and try to avoid the RAAF area because it is just too easy to get distracted.

The AWM is a Must Do for any visitor to the ‘Berra, and Entry is at No Cost. Pick me up along the way……….

It was Vietnam Veterans Day last week. Commemorated on the 18th of August every year, my eldest and I were witness to a gathering at the Memorial Park in beautiful Nelson Bay, New South Wales.

Originally known as Long Tan Day, the date was chosen to commemorate the men of D Company, 6RAR who fought in the battle of Long Tan in 1966. On that day, 108 Australian and New Zealand soldiers fought a pitched battle against over 2,000 North Vietnamese and Viet Cong troops in a rubber plantation not far from the small village of Long Tan.

On the third anniversary of Long Tan, 18 August 1969, a cross was raised on the site of the battle by the men of 6RAR, honouring the 18 Australians who lost their lives.

Late last year the Vietnamese Government made the decision to hand the cross back to Australia, as a gesture of “goodwill” (following a political incident which barred Veterans from visiting the cross in Vietnam for the 50th anniversary of the event. Just one of those little “incidents” that we must gloss over). It is now on display at the Australian War Memorial in Canberra. 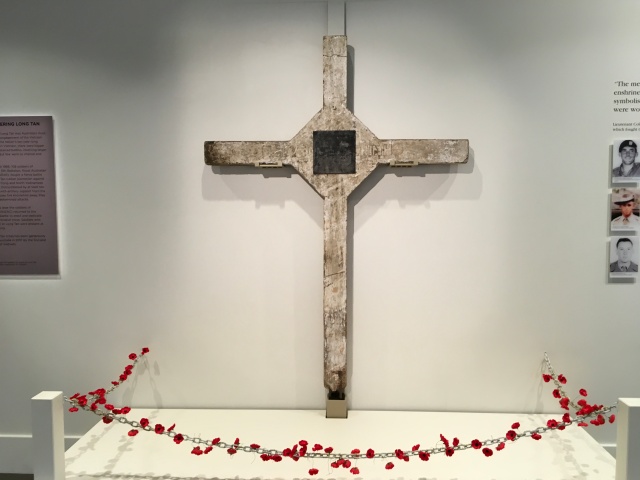 Synchronicity is a concept, first introduced by analytical psychologist Carl Jung, which holds that events are “meaningful coincidences” if they occur with no causal relationship yet seem to be meaningfully related.

Amongst my social media this morning was an item about a good friend’s father who has a plaque in his honour at the Stockman’s Hall of Fame, in Longreach, out near Woop Woop and the Black Stump. ( For non Aussies, that’s out in the sticks, or way out in the middle of nowhere). Thomas Davies had been a Prisoner of War, in Changi, during WW2, and had been responsible for cremating the bodies at “Cholera Hill”.

Tonight, after an Indian buffet that I may well regret in the morning, I have been reading about a commemorative service to mark the 75th anniversary of Australian work on Hellfire Pass and completion of the Thai-Burma Railway to be held on 16th October, in Ballarat, Victoria.

Located at Konyu, Thailand, Hellfire Pass consisted of two cuttings, the first measured 460-metres long by 7.6-metres deep, the second was 73-metres long and 24-metres deep. More than 2,800 Australian POWs are believed to have died working on the Railway, some 700 of them at Hellfire Pass alone.

I recently visited the Edward (Weary) Dunlop statue at the Australian War Memorial. Dunlop was a POW in Changi, and as both a Doctor and leader of men, was much respected. In my household full of world weary cynics, Weary was much revered and his State funeral was the only one of its kind that I can remember. (Prime Ministers? Who gives a rats?). Within the last 24 hours I have been reviewing my photos taken at the AWM to share with the daughter as their main exhibition covers Afghanistan in which she has an interest. 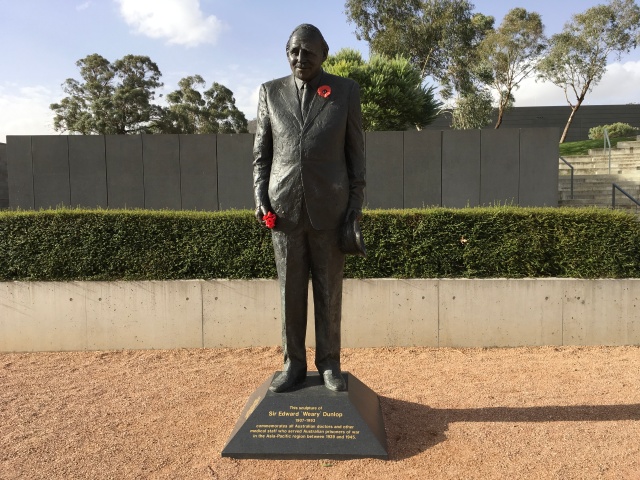 As well as Errol, old movies, possums, and good books I also enjoy my music. Music of all kinds. It soothes the beast within. Different kinds of music for different times. I stumbled upon this tune today. I’m calling it synchronicity.

PS. Despite its locality, the Stockman’s Hall of Fame is one of the most cherished venues in Australia. It’s on my To Do List.

With limited time in Canberra my visit to the Australian War Memorial was reduced to hours. No matter. I focussed on the most recent Exhibition : Australia’s Special Forces.

I’ll share more about this another time. A lot to process and quite confronting.

So I pressed on to see the artwork depicting Teddy Sheean. Up until twelve months ago I was clueless about Edward “Teddy” Sheean, a sailor in the Royal Australian Navy during the Second World War. A friendly Tasmanian who was fond of both a story and a drink told me about this young, Tasmanian lad.

From Wikipedia :
“Ordinary Seaman Edward Sheean was killed during the attack by Japanese aircraft which sank the Bathurst Class corvette HMAS Armidale in the Arafura Sea on 1 December 1942. Armidale set out from Darwin for Betano, Timor, on a twofold mission: to take relief troops to Sparrow Force, the Allied presence on Timor, and to bring back withdrawing troops. Under frequent air attacks, the ship was unable to complete its mission and sank within minutes of being hit by two torpedoes. After the order to “abandon ship”, Teddy Sheean, although twice wounded, stayed at his post at the aft Oerlikon gun, bringing down an enemy bomber. He was still firing when the ship sank”.

Sheean was posthumously Mentioned in Despatches “for bravery and devotion to duty when HMAS Armidale was lost.” In May 1999 Sheean was honoured by the Royal Australian Navy when Collins Class Submarine No. 5 was named HMAS Sheean. This is the first occasion on which a RAN vessel has been named after an ordinary seaman.

To this day there remains a push to award Sheean the Victoria Cross.

With Anzac Day less than ten days away the AWM is in full throttle preparing for thousands of visitors from interstate and overseas. It is both an amazing building, and a humbling experience.

I’ve been rereading “Here Is Their Spirit – A History Of The Australian War Memorial” by Michael McKernan which was published to coincide with the 50th Anniversary of the official opening.

Officially opened on Remembrance Day, 11th November, 1941, the concept of the AWM was conceived by WW1 historian, C E W Bean. His vision was for “commemoration and understanding, or more accurately, commemoration through understanding”.

The idea of a museum memorial date backs to 1916, when Bean witnessed the battles in France, though the Australian War Records Section weren’t established until 1917.

An Architectural Design Competition in 1927 did not have a winner though two entrants were asked to work together to fulfil a brief, a brief much reduced due to the Depression.

This book gives a fascinating insight into the trials that went into creating this magnificent building, both political, financial and practical.

It was also wonderful to read how the public embraced the concept and came to the Memorial’s aid enthusiastically when there was a plea for additions to the collection, such as letters, medals, and photographs. One General had to be advised on the quiet that live shells were an inappropriate donation!

Unfortunately, there was a period of disinterest and lack of funding which meant that some priceless objects were either tossed out or stolen.

An interesting read, despite being published nearly thirty years ago with much change instigated since then.

These days the AWM is much valued and considered a national treasure. It has ever changing exhibitions and is constantly being innovative in bringing our past to the forefront. For the centenary anniversary of Gallipoli the projection of 200 iconic wartime photographs on the outside wall of the building each evening was just stunning on so many levels. ( and helped increase the share price for Kleenex I have no doubt). 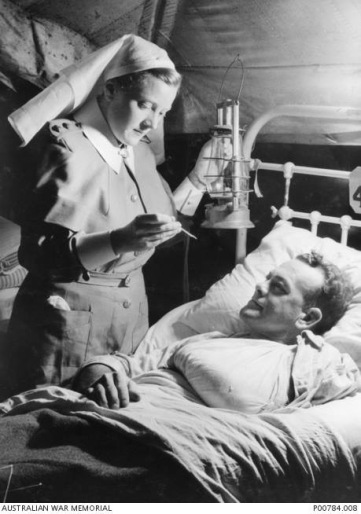 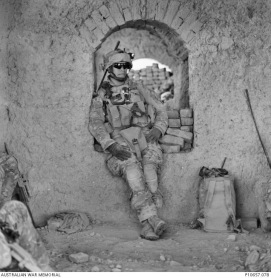 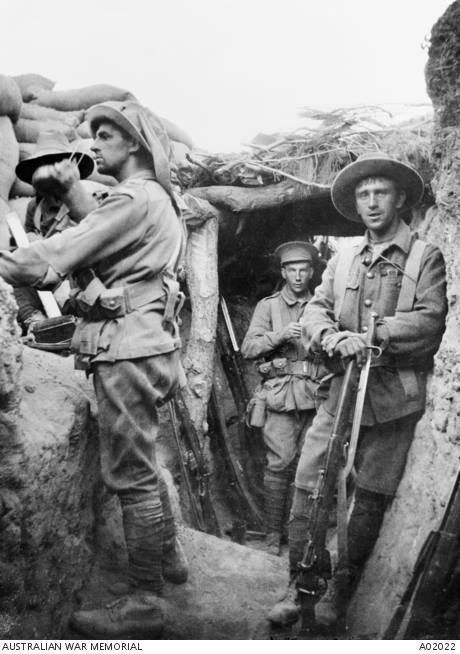 Disappearing shortly for a few days as a Mother’s job role includes restocking fridges and a pantry. My youngest is on the move so I’m also looking forward to stacking the bookshelves-and not in colour coordinated book spine fashion!

I’ve been promised a Yum Cha which is a great motivational tool. Or is it a bribe?

She’s just up the road from the AWM. Do you think she’ll know if I get lost amongst the cartons one afternoon?

“ Here is their spirit,
In the heart of
The land they loved;
And here we guard
The record which they
Themselves made.”
C E W Bean