Just as Hollywood’s leading man, John Wayne, exacerbated my seaweed phobia as recently shared, another of Cinema’s leading men from the 40’s changed my attitude towards play and life in general.

I must have been very impressionable as a child, although at no time did I pick up any of my mother’s genteel interests such as lacework, tapestry or sewing. I remember being gifted an old Singer sewing machine when I was twelve. Eventually it made a half decent decoration in the garden.

Back to this particular leading man, another tall chap with swagger. 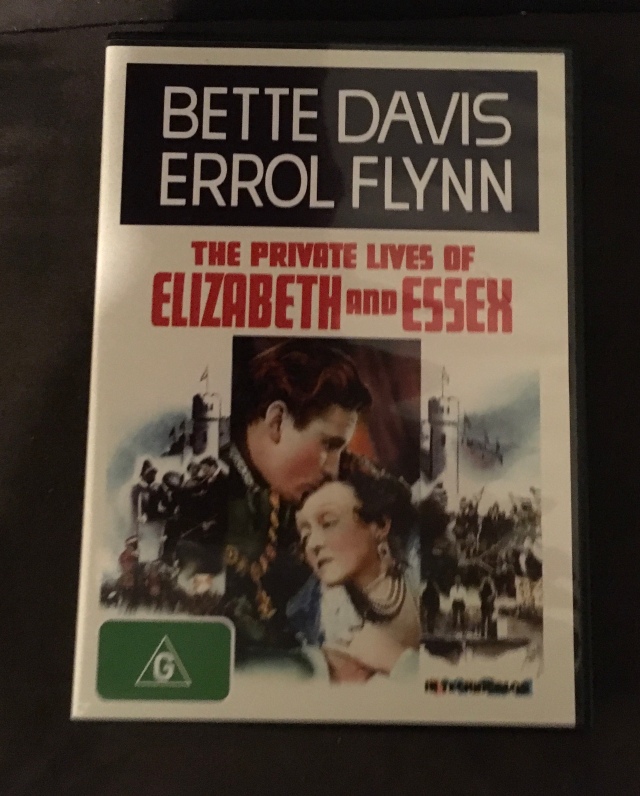 The Private Lives of Elizabeth and Essex was released in 1939 and starred Bette Davis as Queen Elizabeth 1, a simpering Olivia de Havilland, and Errol Flynn as the Earl of Essex. The circumstances don’t matter much for this exercise. What countered was the fact that a dashing Earl of Essex, lost his head. Literally. Chop, chop, chop, it fell into the basket beside the chopping block.

It must have been a few years before the dreaded giant squid episode – Go here – and I remember being devastated and screaming like a banshee. Poor Captain Blood. Oh, my precious Robin Hood.

It’s okay. I did recover my sensibilities. Of a sort.

I took to decapitating the heads of the few dolls possessed by other family members. The original Wednesday Adams. Headless Barbie’s were de rigour in my home.

My mother was aghast. My father bought me a cap gun and an Indian teepee for the back garden. Too much TV, he said.

NB Apologies for the lack of Literary references. Having one of those spells when every book you pick up is just……dreadful. Thank goodness for the charity book sale this weekend!

No book shelf in this little beach shack we’ve been renting, but does that really matter when you only have to walk 100 metres to wet the fishing line? Besides, the fresh fish for tea every night I’ve really delighted in sitting on the porch with a pot of tea and watching all the other poor souls travel to work each day. Sad, but that does give me so much pleasure.

The shack does have a supply of local community magazines which I’ve just loved. From these you learn the whereabouts of the cheapest Sunday Roast, the location of the closest Garden Centre, and whereabouts the local markets are held. They are a fund of information.

I’ve just read a fascinating article written by a gentleman by the name of Neil Wilson about the board game, Monopoly. Hands up who hasn’t played Monopoly?

In my family, Monopoly was always one way to start a war, not help finish one.

There is also a local Book Exchange in the Village. Look what I found…..

With the impending departure of the LOML overseas – ooops, that would be to the bosom of his family in Tasmania – a girl has planned an Errol Flynn movie marathon.

Commencing this nod to the senses with Elizabeth and Essex, a movie that traumatised me as a child. Witnessing Errol Flynn getting his head chopped off could easily have pushed me towards a life of crime as I spent many happy months decapitating my Barbie dolls as a consequence. Bette Davis playing Queen Elizabeth 1 set herself up beautifully for her later Award winning performance in Whatever Happened To Baby Jane with the original resting bitch face.

I’ll be following this with The Adventures of Robin Hood. One of Errol’s first movies and clad in Lincoln Green a girl does like a man with a big sword. Sadly this movie too was destroyed by the female protagonist in the form of a young Olivia De Havilland, playing Maid Marion. I’m sure Olivia is a lovely person – she’s still alive, you know, and living in France – but oh so insipid and sweet. I felt she always deserved a good belt in the chops. 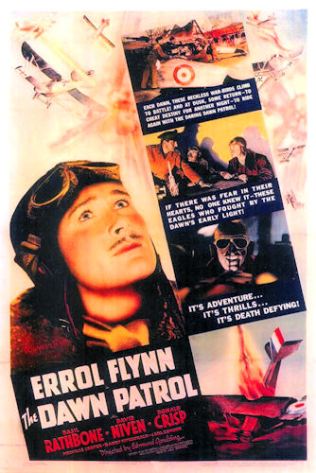 Having by this time resolved any lingering anger management issues Gentleman Jim Corbett will follow, with our local hero playing a pugilist of Irish extraction who takes on World Heavyweight Champion, John L Sullivan, played by Ward Bond. The feisty uptown girl, Alexis Smith, plays the love interest and gives as good as she gets. Lots of laughs in this one and the collection of bit players contribute to making this viewing a truly joyful experience.

Right. My favourite of all Flynn movies: The Dawn Patrol. This is an old black and white about the futility of war with Errol playing a fly boy during WW1. Such a serious and sad topic delivered with bravado by Errol, real life mate David Niven, and Basil Rathbone. I saw this on the big screen for the 100th birthday celebration for Flynn in his birth town of Hobart, Tasmania, and it was spectacular, particularly as my daughter was shouting the champagnes. 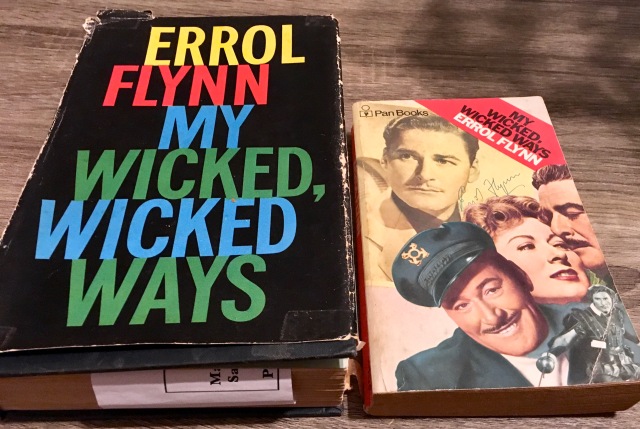 Why have I brought this up? I recently came upon a first edition, hardback cover of Flynn’s autobiography, My Wicked Wicked Ways. This is the uncensored version which I had not previously read. I was disappointed with the original, though not because of the stuff that was later cut. The sexy bits were tame when compared to today’s reads. It was the sloppy ramblings that disappointed.

The wine is chilled and the chick peas roasted. Here’s to the latter balancing out the former. Salute.