I was going to rant about the commercialisation of this date on the calendar and how these days have become mere marketing tools. But I am mellowing as I get older, so instead I will share some fun things.

First of all, my gift through the post from my youngest daughter, who writes Government policy for a living. WARNING : if you are feint hearted – don’t look. 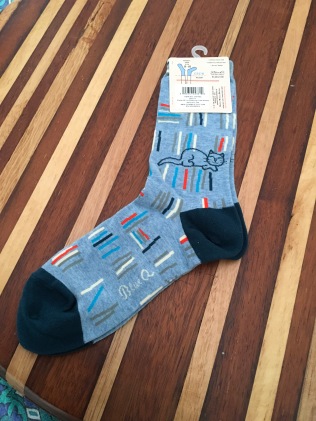 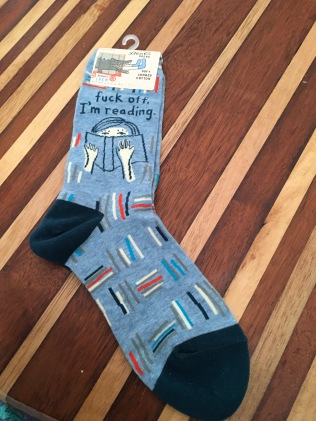 A card from the eldest daughter thanked me for “ teaching us all the important things in life, like how to make a platter, the Hollywood Classics, and the best reads. Thankyou also for sharing with us your love of music and introducing us to Carole King”.

Platters. My kids were brought up on platters : good food, good wine, good social skills whilst grazing. What could be better? Here is a recent Easter platter.

The Hollywood Classics. Some people have replicated Monet’s on their walls – I’ve always had Errol Flynn lobby cards. Now both kids have a collection that rivals mine, with one owning a collection of singing Bing Crosby dolls. I kid you not. They’ve both told me that everything but my Errol’s is going to the dump when I’m dead.

Books. Because we all live in different parts of the country the youngest instigated a book club amongst the three of us, so each time we met up for a long weekend, we would sit around a champagne breakfast on the Sunday chatting about the designated book. This went really well for several years until the eldest nominated Book 1 of Game of Thrones. 1052 pages. I can remember the battle to get through each and every page. What a struggle, but mother can’t let the side down, can she? So, when we finally get to discuss this epic, number 2 intelligently discusses themes,
comparative history lessons, politics and feminism. I am gobsmacked but manage to comment. Number 1? Informs us she watched the television version instead.

Music. Soothes the soul and suits all moods. My father eased each loss with music, as have I. Music has also been celebratory which I have shared with both daughters. Music and Theatre. Expensive interests, but “you’re a long time dead”. ( Thank you, Father Bear, for my mantra) . After our recent Queen with Adam Lambert Concert we made a pact to travel anywhere in the world to be at their last ever concert. Brian May is looking so damn good that might be another fifty years down the track.

So Happy Days to all mums and dads, grandparents, uncles and aunts, sisters and brothers, and all those who have had a hand in shaping our younger ones. With the grey hair comes the great memories.

Oh, and I’m off to see Beautiful, The Carole King Story.

PS I still have no grey hair.

I would give myself a rating of 8/10 for my motherhood performance this weekend.

I have delivered on the meals apparently. This is my Pumpkin Red Thai Curry cooked lovingly despite having been on the go since 4am. Delicious, and all those fresh vegetables ensured we had the strength to continue with the task of unpacking removalist cartons the following day.

My daughter, the one working through “1001 Books To Read Before You Die”, left me in charge of stacking her bookshelves. Her new abode is a contemporary two bedroom unit, although she refers to it as being “ one bedroom and a reading room”.

Anyway, I lost points for putting the Stozhenitsyns next to her collection of Musical DVDs. Think Ms must have been an old dance hall girl in a previous life. Did you not know that Julie Andrews and Doris Day cannot sit next to, or on the same shelf as, The Cancer Ward?

Also Bing Crosby and Frank Sinatra movies are their own genre and are in a separate musical DVD section.

Mothers are very good, however, at buying toilet brushes, washing powder, and bath mats. I’ve graciously declined the opportunity to be in charge of rehoming the CDs.

I’ve also located a couple of really eclectic chairs most suitable for any Reading Room, but Ms is quite dismissive. What do you think? 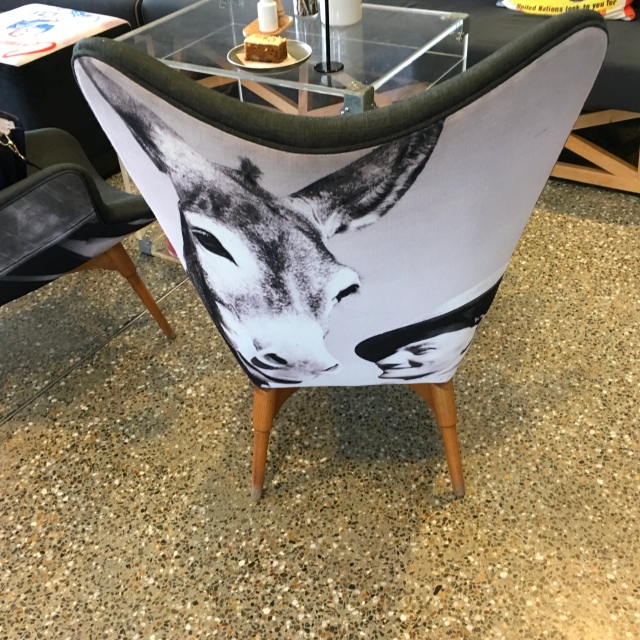 Woke up feeling joyous. Why? First day since Christmas Eve that I have been inclined to turn the ceiling fans off. The fans do a reasonable job maintaining the house at a comfortable temperature but for a few days there I felt like I was living next door to a helicopter launching pad as the fans were going at full bore.

Whilst on holidays I’ve completed ten books and watched even more movies. My home has been rearranged and decluttered, I have spent time in the garden and have another twenty Rosemary plants potted to raise funds for my charity. Even more exciting, the Christmas ham is at last finished, gone, kaput. Thank goodness for that! Now to start cooking the Ham and Vegetable Soup, so thick a spoon will stand up in it, for freezing for the winter months.

So sharing the happiness : I just devoured my first Hot Cross Bun for 2018. My parents would be turning in their graves as they instilled in me that these were Easter treats only. It wasn’t that they were particularly tasty as they lacked any hint of spice or fruit. It was my first act of rebellion for the year and one that doesn’t  mean eternal damnation.

With all the tidying I came across this purchase I made some months ago.  Typical Gemini, it had been misplaced with numerous other items, such as Xmas gifts that I only located on Boxing Day. 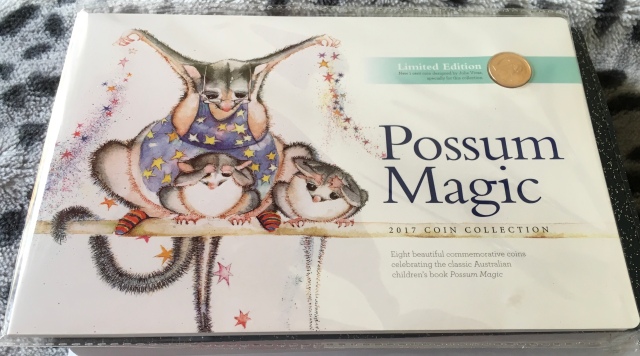 Mem Fox’s charming Possum Magic has been capturing the hearts of the young (and the young at heart!) for over three decades. The book tells the story of Hush and Grandma Poss, with the tale brought to life by Julie Vivas’ iconic watercolour illustrations. Indeed, it is those incredible illustrations that have now been enshrined in Australian legal tender. 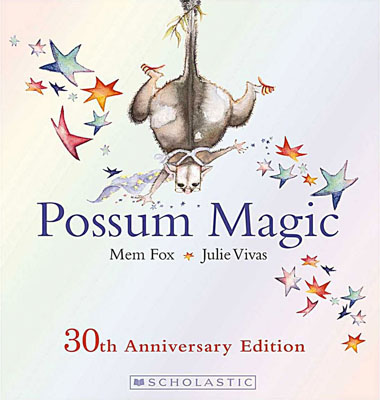 The two main characters are Grandma Poss and Hush. Hush has been made invisible by Grandma to protect her from Australian bush dangers. The story details the duo’s adventures as they tour Australia searching for the secret to Hush’s visibility. It is a rhythmical story of Australia’s varied landscapes and the animals in them.

This is a really lovely book for Little People and it has been well read in our home. I’ll be purchasing a couple more copies for some Imminent Emminents soon.

In late 2016 the breakfast culinary delight, Smashed Avocado, became a political football when Australian demographer, Bernard Salt, wrote in local media, “that young people buying smashed avocado with crumbled feta on five-grain toasted bread at $22 a pop was contributing to their inability to buy a home”.

I am quietly awaiting another uproar by the masses following my recent offering of Smashed Brussel Sprouts at Christmas lunch.

Brussel Sprouts have a proud history with their forerunners likely cultivated in Ancient Rome and possibly as early as the 1200s, in Belgium. The first written description of Brussels sprouts was in 1587. These misunderstood little packages of goodness have been included in works of literature throughout the ages, and in Australia became a part of folklore, with the chant “Far Out, Brussel Sprout” being heard within school yards and public service buildings across the country.

Sadly in some countries Brussel Sprouts are reviled. A 2008 survey by Heinz names this compact little vegetable the most hated vegetable in America, and in the Top 5 around the world.

Here is my nod to the humble Brussel Sprout:

Drain and tip into an ice bath. Yes, like an athlete after a big game.

When coolled, Smash. Do not obliterate. You want them to retain their shape, so just press the bread board down hard on them, so they look thinner. Appearance is everything these days, and as some old biddy once said “ you can never be too thin”.

Place on a tray which has been lined with baking paper.

Bake in oven for twenty minutes , or when topping is golden in colour, and serve immediately.

I loved this dish, though in the total scheme of things, it was an abysmal failure. Surrounded by prawns, ham, turkey and several boxes of chocolates this concoction did not even rate a look in by the younger guests at Christmas lunch.

It looks like I’ll be eating it on my own for months to come.

A very spoilt girl, I’ve just returned from a weekend in a rural setting in Bed and Breakfast accomodation. Bunnyconnellen is a working Olive Grove and Winery located in Crows Nest, two hours north west of Brisbane, the capital city of Queensland. The topography is predominately undulating farmland, whilst the township itself still has reminders of its historic past as a timber town and regional centre for pig sale yards.

I won’t bore you with details of the log fires, long morning walks spotting the abundant wildlife, and crisp Chardonnays with complimenting platters of food.

Once again, I was fascinated by the selection of books available in the holiday home.

The bookshelf at Bunnyconnellen reflected the country setting. Poetry by Australia’s best known bush poet, Banjo Patterson, a book on Station Life in Australia, and my favourite, Posh Eggs which was chockablock with recipes as the title suggests. 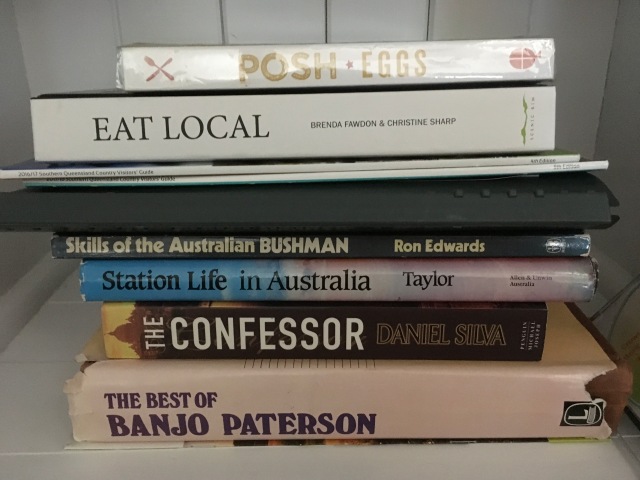 Flitting through Posh Eggs was the perfect book for our short, but delightful, country stay. Insufficient time to experiment with any of the recipes, though I have returned home feeling a little inspired and with more of an appreciation for the humble egg.