I don’t do illness, or ill people, well. A character flaw and I blame the military patriarch who would yell at his daughters at the first sign of any slight weakness, “Toughen up. Stop being girls”. My father did not get sick until the month he died and I follow in his footsteps. The young things flag at work – I just march through it, soldiering on.

I softened once my own daughters came along and did not have the stomach for children’s illness’. If the six year old vomited, the seven year old had to clean up after her. Poor parenting I know, but I would be kneeling over the toilet bowl in sympathy. I remember having to take the teenager to the Dentist to get the last of her baby teeth pulled. She entered the surgery bravely whilst I fainted on the footpath outside.

Both my daughters have always had a fascination with medical procedures, and are addicted to those ghastly shows on the television that feature an assortment of lumps, bumps and stumps. There was one dinner party where the kids were far too quiet for my liking so I sneaked in to see what mischief they were up too. What did I find? Half a dozen cherubs fascinated by the DVD of my recent Colonoscopy!

So I was surprised when an acquaintance handed me a book and said “ I know that you will just love this!”

Our Vietnam Nurses by Annabelle Brayley, tells fifteen stories about civilian and military nurses, as well as a couple of medics, who all played their part in saving lives and comforting the wounded during this period of history. 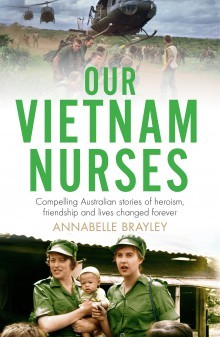 There were several common threads throughout this book:
• None of them had any previous knowledge of Vietnam and it was very much a “think on your feet “ process when they landed in the middle of a war zone.
• All those interviewed saw their efforts as both crucial and rewarding
• All feel as if there lives changed direction from the experience of serving in such a manner

Yes, the book did dish up blood and guts as to be expected, though many of the cases detailed had positive outcomes, with the larrikin spirit of young Australian Soldiers shining through. The constant themes were the camaraderie, strong working relationships and commitment to achieve the very best with the little that they had to help the injured.

This book is primarily personal recollections which added to my interest. It made the history more real.

One hundred and six nursing officers from the Royal Australian Air Force Nursing Sisters ( RAAFNS) we’re deployed to No.4 Hospital at Butterworth Airforce Base in Malaysia to care for military personnel based there and to fly medivacs into Saigon or Vung Tua evacuating wounded Australian soldiers back to Butterworth, and then home. Between 1965 and 1971 thirty two of them were attached to the United States Air Force for 60 day rotations flying missions into Vietnam on a daily basis to evacuate wounded American soldiers.

There were also more than 200 civilian nurses who were members of the South East Asia Treaty Organisation who assisted civilian surgical medical teams across a similar time line, and operating within Vietnam.

And you know what horrified me the most? Not the shattered bodies, infestations of worms, or grenades under hospital beds. Did you know that it wasn’t until the early 1990’s that all RAAF nurses who flew from Butterworth to Vietnam to medivac injured Aussie soldiers, or who were seconded to the USAF, were acknowledged for their contribution?

Another pox on the Australian Government, who currently cannot find $200,000 to send a handful of weary Bomber Command veterans to the opening of the International Bomber Command Centre in England this year. They say they are “ too old”. I would argue that they were “too young” when they did their bit.

Great read. Highly recommended even if amputations aren’t your thing.

You’ll just have to wait till I share my dental experiences……..

PS Vietnam Nurse song by Australian, Russell Morris, who has long since lost his hair, but not his voice. (Courtesy of You Tube)