Discovery of the year and bargain buy for $5 on a throw out table: The Searchers, The Making Of An American Legend, by Glenn Frankel.

Let’s start with an admission : my knowledge of American History is minimal. What we learned Down Under in our formative years was pretty much limited to what we watched on TV. Lots of Daniel Boone, Tarzan, and Combat. I don’t think it’s changed much over time as my own daughters see the USA through the programs Band Of Brothers and West Wing. If it makes you feel any better at school in the 60s we didn’t learn much about our own country either.

So although I was quite familiar with the John Ford movie, The Searchers, starring John Wayne, I was excited to find the history behind this movie on a table of cheap books in brand spanking new condition. You couldn’t leave it there, could you?

This book is divided into four parts. Firstly, we learn the story of Cynthia Ann Parker, the daughter of settlers to Missouri in the 1830’s, who was captured during an Indian raid and grew up as a Comanche, later bearing two sons to a Indian warrior. She is eventually located by the Calvary and returned to her white relatives, though this is more problematic than anticipated. It also includes an outline of other white children captured by Indians previously, although much of this earlier history was not recorded.

The next section of the book refers to Cynthia’s son, Quanah, who was a young boy when separated from his mother due to circumstances. Although they never reconnected Quanah embraced living as a white man as a young man, and was able to live comfortably with a foot in each door. He was instrumental in bringing understanding to both indigenous and white populations. All these years later, there is still an annual family reunion in which relatives from both branches of his family tree reconnect.

We then move on to the author of the novel, The Searchers, Alan LeMay. LeMay, who specialised in the Western genre, was himself a descendent of early settlers to Kansas and grew up on tales handed down from the pioneers. Also a screenwriter, the author refused to be involved in transposing this book, a conglomeration of stories he had learned as a child, into a movie, and wanted nothing to do with Director, John Ford.

This is fascinating as Frankel, a Pulitzer winning Journalist, takes the reader through the changes from book version to movie, and how and why these changes were accommodated. I was astounded to learn that in the book Wayne’s character is killed by a woman. Hard to fathom, isn’t it?

The last section is an absolute joy for movie buffs, where we are taken through all the ins and outs of the making of the movie, with tantalising trivia all along the way. From the celebrities who vied for a role, the connection between those who did gain roles, as well as everything you wanted to know about Monument Valley and Ford’s passion for the site.

Many others who are far better equipped have commented on the movie. This book by Frankel is just so well written and well researched that it is an absolute joy to read. My next project is to track down a copy of LeMay’s novel through second hand book stores – starting now! 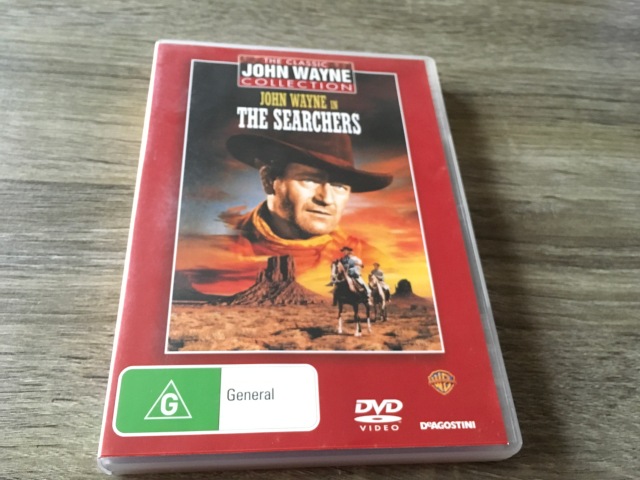 “Myths are neither true nor untrue, but the product and process of man’s yearning. As such, they’re the most primal thing bonding us to other people. Yet the phenomenon is much more than a snake feeding on its own tail. Myths gather momentum because they provide hope”.

Cynthia Buchanan “Come Home John Wayne, And Speak For Us”