In Primary School days, way back in the 60’s, one of the things that made the annual Anzac Day Ceremony so special was that you could wear your Cubs or Brownies uniform to school. My sister and her friends wore their white aprons with red capes and little hats bearing a Red Cross. My Annie Oakley outfit and cap guns were unacceptable.

Tragically, throughout my entire schooling, there was never any other mention of the magnificent work of the nursing services during either World War 1 or 2. Florence Nightingale was it.

I read Anzac Girls after watching the 2014 ABC Mini series of the same name, as well as attending a one act theatre production called The Girls in Grey, both of which were based on Peter Rees’ book.

Using diaries and letters, Peter Rees takes us into the hospital camps and the wards, and the tent surgeries on the edge of some of the most horrific battle fronts of human history. But he also allows the friendships and loves of these compassionate women to shine through and to enrich our experience.

This is a brilliant read. Forgetting about the courage, strength and humanity of these magnificent women amid all the expected carnage, there were some other factors that made this such a fascinating book.

Firstly, Rees cleverly wove other stories into the fabric of the Anzac Nurses which fleshed out Australian history and highlighting the time line and providing perspective. This included references to Banjo Paterson, poet and war correspondent, as well as C J Dennis, another poet who immortalised a “situation” regarding the AIF and brothels in Cairo in his poem , The Battle Of The Wazzir. http://www.middlemiss.org/lit/authors/denniscj/gmick/wazzir.html.

There was little recognition for these women at the time. Despite working in a theatre of war for over four years there was no financial assistance for housing, although soldiers were entitled. Some nurses had to work their passage home attending to soldier’s wives and children on board, and others had to depend on their families paying the passage home even though the British Government was paying the costs for transporting war brides. Woeful, absolutely woeful.

Lastly, and what I found particularly inspiring, is that many of these women went on to do magnificent things in civilian life regardless of the terrible things that they had endured. They were indeed trail blazers.

Best read for the year, and I will just add that I made a much better cowgirl than nurse.

There’s a Rose that grows in No Man’s Land,
And it’s wonderful to see.
Tho’ it’s sprayed with tears,
It will live for years
In my garden of memory.
It’s the one red rose
That the soldier knows,
It’s the work of the Master’s Hand;
In the War’s great curse stands the Red Cross Nurse,
She’s the rose of No Man’s Land.
(American song)

With limited time in Canberra my visit to the Australian War Memorial was reduced to hours. No matter. I focussed on the most recent Exhibition : Australia’s Special Forces. 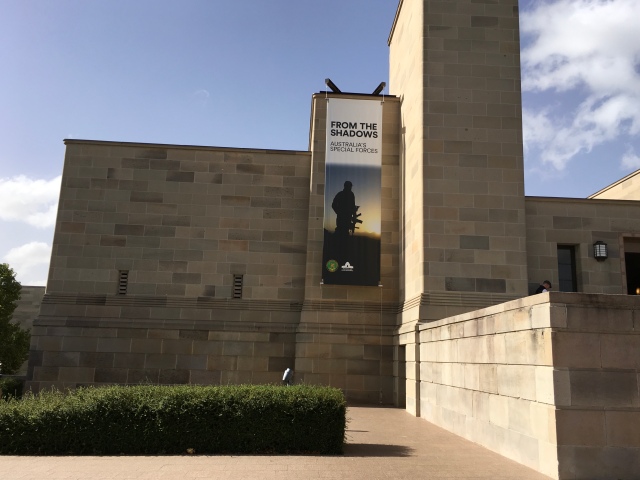 I’ll share more about this another time. A lot to process and quite confronting.

So I pressed on to see the artwork depicting Teddy Sheean. Up until twelve months ago I was clueless about Edward “Teddy” Sheean, a sailor in the Royal Australian Navy during the Second World War. A friendly Tasmanian who was fond of both a story and a drink told me about this young, Tasmanian lad.

From Wikipedia :
“Ordinary Seaman Edward Sheean was killed during the attack by Japanese aircraft which sank the Bathurst Class corvette HMAS Armidale in the Arafura Sea on 1 December 1942. Armidale set out from Darwin for Betano, Timor, on a twofold mission: to take relief troops to Sparrow Force, the Allied presence on Timor, and to bring back withdrawing troops. Under frequent air attacks, the ship was unable to complete its mission and sank within minutes of being hit by two torpedoes. After the order to “abandon ship”, Teddy Sheean, although twice wounded, stayed at his post at the aft Oerlikon gun, bringing down an enemy bomber. He was still firing when the ship sank”.

Sheean was posthumously Mentioned in Despatches “for bravery and devotion to duty when HMAS Armidale was lost.” In May 1999 Sheean was honoured by the Royal Australian Navy when Collins Class Submarine No. 5 was named HMAS Sheean. This is the first occasion on which a RAN vessel has been named after an ordinary seaman.

To this day there remains a push to award Sheean the Victoria Cross.

With Anzac Day less than ten days away the AWM is in full throttle preparing for thousands of visitors from interstate and overseas. It is both an amazing building, and a humbling experience.

Repotted some plants today and fussed over my young Rosemary cuttings. Rosemary is synonymous with Anzac Day as there was an abundance of Rosemary bushes on the hills of Anzac Cove in Gallipoli at the time of the landing in 1915. It has since become tradition for Australians to wear a sprig of Rosemary on the 25th of April. 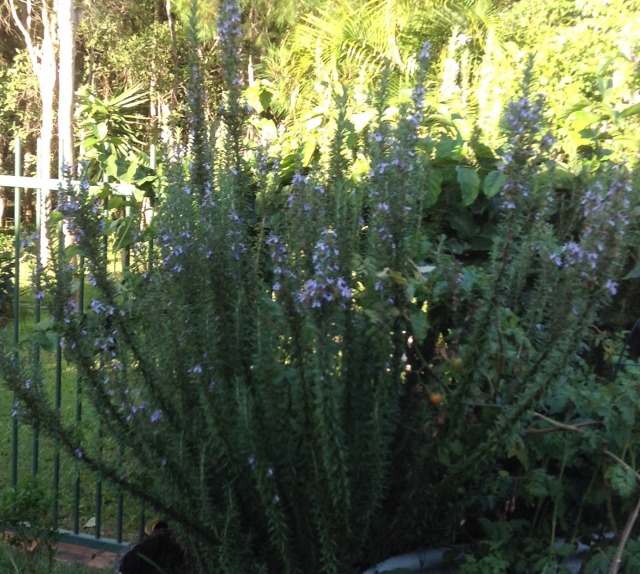 Rosemary Oil also has properties that aid the memory – another reason that this beautiful bush is so popular on the day! Rosemary For Memories………(Tip : if you have a student about to sit exams, a few drops of Rosemary Oil in a diffuser is said to help).

I have less than a dozen plants left now, which I plan to sell over the coming week, with all funds raised going to my charity which supports ex service personnel requiring a hand up upon deployment. Come late winter I will start the process all over again, taking cuttings, planting, and giving much love to these beautiful little shrubs. And yes, some are destined for my pantry where they will offer themselves as a sacrifice to enhance the Sunday roast.

Funnily enough I recently became acquainted with the Geranium Lady of Queensland. She propagates and then later sells Geraniums for the very same reason. She has a son in the military. I have a son-in-law named after Douglas Macarthur. Says it all really. We girls recently met up for a coffee only to discover that nearly forty years ago we attended the same high school nearly 2000 kilometres away. Bizarre.

So no reading this weekend. I am having fun with some books that were gifted to me some time ago, the idea being to create your own Lists. The music one is far easier to compile as songs are transient. After all, I’m still listening to my LPs from the 1970’s. ( okay, yes, slightly embarrassed). Not so with books. Sometimes I select a book for reading from the Library only to remember 200 pages in that I have already read it. More Rosemary for me please……

A peaceful Easter to you all.